No Way Back @ The Bunker

The Bunker & Interdimensional Transmissions present
NO WAY BACK

The space will be transformed by Amber Gillen from IT

No Way Back is not a festival, it is not an event - it is a party.

After the overwhelming success that followed moving 2015's Detroit edition of No Way Back from 1515 to Tangent Gallery, we felt the need to spread our wings a bit in Brooklyn as well, so we're moving from Trans Pecos to the recently reopened Market Hotel.

If you don't understand the touchstones of this party, it might be impossible to explain. It is a comment on a continuum. For many of us it began the 90s, searching through fliers at Record Time, calling info lines and buying your ticket at Zoot's only to get lost trying to find that elusive warehouse. What was inside? Something amazing... This is our generation returning to the source, feeling a freedom and a heat within the music that resulted in speaker freaking.

Every generation experiences this without the aid of a night club time machine, whether it was at The Loft, Better Days, The Paradise Garage, The Warehouse, The Shrine, Cosmic, Luomos, The Muzic Box, The Hacienda, Medusa's, The Music Institute, or Berghain. You might not even know that you have soul until you experience being totally lost in the mind control music and realizing there is no way back.

Every DJ chosen to play at No Way Back is a master of their medium, so deep in it that they all serve as constant inspirations. This is a celebration of the lost art of the late night Midwestern DJ. This is what makes the collaboration between Interdimensional Transmissions and The Bunker so effortless, as they both are champions of this, with The Bunker residents like Derek Plaslaiko, Mike Servito and Bryan Kasenic being long time IT collaborators.

Many DJs have reputations defined by a certain place and time. Not so for Derek Plaslaiko, whose 20-year career behind the decks has seen him gather a loyal fan base wherever and whenever he may be.

Some will know Derek as a favorite of the mid-90s Detroit warehouse scene, which lead to a personal invite from Carl Craig to appear at the inaugural Detroit Electronic Music Festival in 2000. Others recognize him from his near decade-long residency at The Bunker New York parties, during which time he was named “Best Techno Party DJ” by the Village Voice in 2006. Then there was the summer of 2011 spent behind the decks at Berlin’s infamous Club der Visionaere, as an honorary resident at the weekly Visionquest nights—a worthy introduction to the city he now calls home.

Of late, there is a new generation of party people who will know Plaslaiko from his extended sets (up to 12 hours) in New York, Paris, Seattle, Los Angeles and Philadelphia, or his regular appearances at clubs like Tresor, Hot Mass, Beta, Output, Smart Bar and Berghain, and festivals like Decibel, Communikey and Movement. Or some who caught his name on the flier for the No Way Back series of parties put on by Interdimensional Transmissions, the Detroit imprint that has put out several of Plaslaiko’s rare original releases, along with Perc Trax and Minus.

There are tens of thousands of others who caught on to Plaslaiko following his record-breaking 12-hour Boiler Room set, where he gave viewers a look into his living room, while friends and friend’s toddlers enjoyed the day. This landmark session properly archived the full Plaslaiko musical experience, from flawless house and techno, to hip-hop, classic rock, and whatever other musical moment this life-long record obsessive chooses to share. And let’s not forget the thousands of folks who have befriended Plaslaiko while sharing the dance floor with this committed clubber who refuses to hang out in the booth and will always skip the DJ dinner in favor of catching one of his peers behind the decks.

Wherever one picks up Plaslaiko’s story, maybe during his days dealing discs in Detroit’s famed Record Time dance room or possibly the years spent moving serious weight at Watts and Syntax Distribution, the one constant is top-shelf musical taste, as defined by Plaslaiko’s personal heroes—names like Laurent Garnier, Daniel Bell and Zip, and colleagues including Carlos Souffront, Jason Kendig and Mike Servito—and a passion for music that over-rides the usual trappings of the modern DJ industry.

This may mean to some that Plaslaiko is still unsung. But for those who know better (and there are many all over the world), praise for Derek has been sung for decades.

Erika dreams on the cellular level, or perhaps of transdimensional intelligences moving through strange patterns on celestial objects, working towards a mysterious goal. Her connection to the dreamworld becomes concrete in her approach to music, simultaneously so solid and yet so ethereal. Erika still finds time to accomplish many things in her waking hours, such as being a member of Ectomorph, co-conspirator of Detroit's Interdimensional Transmissions record label, DJing with vinyl, making music with her pet machines, and running erika.net - a freeform streaming radio station. Erika.net celebrates its 14th year this year, being one of the very first iTunes presets. From 1993 through 1999, Erika was very involved in WCBN in Ann Arbor, as a freeform and jazz DJ, and Program Director.

Carlos Souffront is a music gourmet, a true DJ's DJ. His taste is rich and vast and he has the unique ability to create deeply rhythmic narratives that offer unexpected and exotic spices. He mastered his deep mixing skills with a cassette deck and a belt drive turntable in his father's den in Troy, home of contemporaries such as Mike Servito, Tadd Mullinex and Matt Dear. Equally entrenched in indie rock, post punk, experimental music, ambient, rock, house, and techno, Carlos was always a man of many worlds - with an ability to traverse though them with an unique imagination. There is a mood to his search within sound, something that is heavy, deep yet gritty. Like many Caribbean transplants that ends up in northern colder climates, he wonders where our rhythmic complexity is. For him it is effortless and endlessly surprising to the listener.

Carlos is an important component of the Interdimensional Transmissions parties, bringing a loose yet tight moody deepness and an ever unexpected edge. At the original No Way Back party, he demanded truth in advertising, pushing us to and then past the 12 hour mark. He has participated in the studio with Ectomorph, and also performed alongside some of their live performances.

It is all too rare to find someone within the electronic music spectrum that can be called an original, that you can only really explain to someone who experienced them on the dance floor, usually just by saying "that's so" and saying their name. Carlos is one of those rarities. (bio by BMG)

Brendan M Gillen founded Interdimensional Transmissions in late 1994 when he heard far too many ancient voices in his head. Positive that dimensions were colliding and that he could literally feel the deepest will of some mystic past, he decided not to ignore these voices but to contemplate their input, and thus Interdimensional Transmissions came to fruition and the idea-based project Ectomorph found a true home. Since then the vision has continually grown organically and mutated into something that is hard to describe yet easy to feel. His sets effortlessly combine a multitude of seemingly disparate genres into a coalescing solid sound system sensation - pure transcendent psychedelic wizardry. A polymath or sonic alchemist or something. He has recently produced Erika's solo debut, provided a remix for "Hexagon Cloud RMXD" and collaborated with her on the song "Gardeners".

Patrick Russell is a true veteran of the underground, perhaps one of the last unsung heroes of a now lost era in the Midwest. He magically transforms the diaspora of pure jack energy into a fluent sonic dialog that never fails to devastate the dance floor. A Detroit-bred DJ, artist and producer since the early 90's, Patrick has now made Brooklyn his home. His resume highlights include everything from an exclusive opening for Jeff Mills in Detroit in 2007, performing at the 2001 & 2008 DEMF/Movement festivals, to decorating and performing at the inaugural and now legendary leaky warehouse No Way Back. His consummate taste and ecstatic yet disciplined execution have created a respect that cannot be purchased. Patrick is not just one to watch, he is one to be experienced. Patrick has an EP dropping on The Bunker New York soon!

For the past 13 years, The Bunker New York has led the way for American techno by bringing together hundreds of artists from all over the world. More than a mere techno party, The Bunker unites diverse sounds from across the electronic music spectrum, connecting the dots between house, techno, experimental sounds, and much more. The Bunker New York began as a party, grew up into a record label, and has become a collaborative community, fostered by founder and curator Bryan Kasenic since its launch in 2003.

Kasenic's roots in the world of music go deep. In 1993, at the age of 16, he began DJing on Carnegie Mellon’s WRCT in Pittsburgh. He went on to launch his own radio show on WNYU in 1997. The radio show, and his interest in the many weird corners of the NYC music scene, eventually morphed into the creation of a weekly email newsletter, which included noteworthy party and event listings at a time when nothing of the kind existed online. As Bryan became more established in New York City, he created Beyond Booking, the agency that would become a core part of The Bunker New York. During this time, Bryan was also a sought-after DJ, performing at parties and events on a weekly basis. Currently, Bryan also hosts a weekly show on Red Bull Music Academy Radio, featuring The Bunker's friends and family.

Bryan is much more than a mainstay at The Bunker New York. He has also played in many of the finest clubs and venues around the world: Berghain, Panorama Bar, and Atonal Festival in Berlin; Output, Verboten, and MoMA PS1's Warm Up series in New York; Air Tokyo and Circus Osaka in Japan; Smart Bar in Chicago; the Communikey and Decibel festivals in Boulder and Seattle respectively; Public Works in San Francisco; and many more. Additionally, he has co-produced numerous events and festivals, including several years at Unsound Festival New York. Unsound is one of the leading electronic and experimental music festivals worldwide, and he subsequently brought The Bunker to Krakow, Poland, Unsound's native city.

To understand Kasenic as a DJ one needs only look back at his decades of passion promoting electronic and experimental sounds in New York, and towards the sound of the artists that have become key members of The Bunker New York family: the psychedelic, cerebral bent of Atom™, Voices From The Lake, and Reagenz; the swirling, atmospheric soundscapes of Clay Wilson, Zemi17, and Marco Shuttle; and the industrial-strength hardware dynamics of Løt.te, Mark Verbos, and Romans. 12 years after its founding, The Bunker is stronger than it has ever been and continues to grow, thanks to Kasenic's vision and effort. 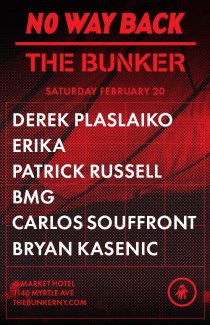